Žiarislav - musician, multi-instrumentalist, songwriter, instrument maker, writer, former journalist and geologist -lives and works in seclusion in the Stolicne Vrchy Hills of central Slovakia. He has retreated into the mountains where he founded organization for revival of the ancient natural spirituality, the Native Circle. He created a special animal farm, where he lives accompanied by horses, goats, sheep, dogs and cats, all free ranged. He is often visited by people interested in the natural lifestyle and ancient spirituality, as well as those that are planning to settle in the nearby area. Žiarislav travels regularly to towns, cities and settlements in Slovakia and the Czech Republic as well as abroad where he is invited to speak and perform. He also performs ceremonies of ancient annual celebrations, gives creative workshops and classes on different areas of Vedomstvo, practice based on ancient spirituality and natural lifestyle in the new era. 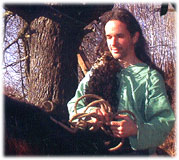 In addition to music, written word and other art genres (dance, art and theater), Žiarislav's recent work includes ethnography, ethnology, ethno-musicology and history in connection with the revived ancient Vedomstvo.

Žiarislav finds the answers and remedies for the current civilization and ecological problems in the revival of Slovak and Slavic culture, through which he points towards the Indo-European culture, encompassing all humanity and all beings.

There is a live interest in his teachings in his home land as well as abroad, mostly in the neighbouring Czech Republic and Moravia and other Slavic countries. The rest of the world is getting familiar with his work through his music.

Žiarislav's other interests and hobbies include archery with hand made bows and arrows, production of goat and sheep cheese, animal care, interspecies communication and healing. A sample form his CD Z vrcharskeho raja: <%song1%>10235<%song2%>10235<%song3%>

Z vrcharskeho raja (From the Mountain Paradise) is Žiarislav's tenth album (latest, 2006), it is his best selling CD in his home land. About half of the songs are upbeat and rocking, some are slow ballads. Even though all lyrics are in Slovak language, you will know exactly what this man is singing about as he included sounds of nature and his animals - horses, goats, dogs - on the recordings. Special guest - singing dog Borka (white sheep dog), his companion that has many offspring now.