Orvieto Cathedral is a large 14th-century Roman Catholic cathedral dedicated to the Assumption of the Virgin Mary and situated in the town of Orvieto in Umbria, central Italy. The cathedral's façade is a classic piece of religious construction, containing elements of design from the 14th to the 20th century, with a large rose window, golden mosaics and three huge bronze doors, while inside resides two frescoed chapels decorated by some of the best Italian painters of the period with images of Judgment Day. The construction of the cathedral lasted almost three centuries with the design and style evolving from Romanesque to Gothic as construction progressed.
Umbria is a region of central Italy. The regional capital is Perugia. The region is characterized by hills, mountains, valleys and historical towns such as the university centre of Perugia, Assisi, a World Heritage Site associated with St. Francis of Assisi, Terni, Norcia, Città di Castello, Gubbio, Spoleto, Orvieto, Todi, Castiglione del Lago, Narni, Amelia, and other small cities. 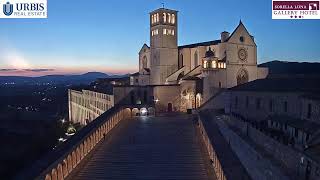 Assisi, the Basilica of San Francesco