Interview with music producer Viktor Szarka: Folklore from the beginning and continuously 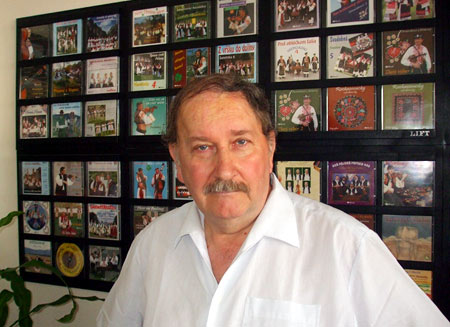 Music producer Viktor Szarka (February 29, 1944 - November 14, 2016) was one of the few music producers in Slovakia who systematically supported a production of Slovak musical folklore. Since the 1970’s, he had made a tremendous contribution as an editor, producer and playwright for preserving and spreading of Slovak folklore songs which are an inseparable part of the national cultural heritage. The following interview was prepared by Panorama.sk in 2009.

We have read that you have been writing songs for Marcela Laiferova and Eva Kostolanyiova. As a publisher today are you primarily focused on folklore? How did you find your passion for it?

In fact, I have been writing songs also for Zora Kolinska, Karol Duchon, Dusan Grun and many others. Besides that, I have also written plenty of pop-natured scenic music for various fairy-tales and by writing several folk songs; I have also joined the company of folk music composers. As a publisher, however, I have never dealt with pop music. It was folklore ever since and continuously for 37 years (since 1972). I graduated from the Pedagogical faculty in Nitra and at the Comenius University in Bratislava where I studied musical science and I was impressed by folklore during these times.

Which title did you release first and when was it?

On the January 1st 1971 thanks to the Dr. Ivan Stanislav, the national enterprise OPUS was created, functioning as a state music label. It took over Slovak titles from SUPRAPHON label by delimitation and then started its own independent editorial activities. Slovak folklore was included in the publishing activities. In the beginning we have been using mainly recordings from the rich archive of the Slovak Radio. In 1972, when I became the chief editor, we started to generate the catalogue with an independent playwright. The first records of this kind were “Pesnicky spod viechy” or “Songs from the ale-house” with famous folklore music of Eugen Farkas and his soloists.

How many music mediums – CD’s, DVD’s, cassette tapes – have you already released?

It is impossible to divide it on different mediums, because in the beginning we only distributed black vinyl (LP, EP, SP), later we used cassette tapes and CD’s. Later we were publishing records on three mediums simultaneously (LP, MC, CD). When it comes to DVD’s they are mediums of the last period.

I have to divide the number of records released into two categories: Around 250-270 titles under the label of the state enterprise OPUS. The last record released this year within the private business environment under the label AKCENT which has been since 1990 has the number 240. So altogether it is around 500 titles.

Which title has been the most successful one?

I wouldn’t like to name just one title if we are talking about the label AKCENT. Many of them have been awarded with golden records in Slovakia and this fact alone speaks about their success. For example titles by Jan Ambroz, folklore music of Jan Hroncek, Datelinka, folklore music of Juraj Pecnik and others. The last golden record was awarded this year during the folklore festival in Detva to Datelinka – The golden selection 1.

What do you consider to be the most valuable record released under your label from the perspective of musical mastery?

It is hard to select one from such an amount of records because we pay the same attention to every title we publish, both from the artist and from a technical point of view. The most successful are those with a very good interpretation. The most valuable ones are those which are unrepeatable, because some of the performers have already left us for good. From the latest ones, I have to mention the Slovak folklore icon Julius Bartos Suka and his last recording called Vecny Julo (Eternal Jules).

Which title is the most successful one at present?

A new recording no matter what period of time. So at the present its: Datelinka – Zlaty vyber 2 (The golden selection 2), Zlate husle (Golden violin) and Veronika Spodniakova, Heligonkari 12 and Heligonkari 13.

The production of your label is specific for covering individual musical instruments and regions. According to you, which region has the most passion for folklore music?

The Podpolanie region without a doubt.

Its musical background, temperament and nature.

When it comes to musical instruments, the most frequent in your label is accordion. Does it mean that accordion is the most popular folklore instrument in Slovakia?

Absolutely. A good accordion player is able to conjure a good atmosphere basically everywhere: during bus tours, friendly meetings, folk ceremonies, in the background at festivals etc. The main advantage of the accordion is that its melody, bass and contra. If it is joined by a good singer, there is nothing missing to give a good mood.

Just like pop music, folklore music also has its stars. Who do you think are the most important personalities among the performers of folk music?

For me, it’s Jan Ambroz and Milan Krizo.

Are there any young capable performers too?

There is not such a crowd as in the case of pop music, but yes, they are here. The biggest talent at the moment is a very young girl called Veronika Spodniakova, whose profile album I have already mentioned earlier.

Do you still have a dream as a publisher?

I have been working as a publisher for 37 years now and with omitting modesty I can say that I have done a lot already. I no longer have dreams. I live in reality.