Hainburg an der Donau is the nearest Austrian town to Bratislava (about 14 kilometers away from Bratislava). It is very nice destination for lovers of history and nature as well as for hikers and bikers, and for paddle trips on the Danube River.

The first known settlers in the area were the Illyrians and the Celtic people, who lived at the Braunsberg Hill (344 meters above the sea level). The town stays at the important point of the Amber Road - an ancient trade route for the transfer of amber, which led from Europe to Asia and back, and from northern Africa to the Baltic Sea.

In the Middle Ages heavily fortified town gates, together with towers, had been a symbol of protection and security. The medieval city walls in length of 2.5 kilometers represent valuable cultural heritage today. 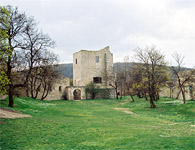 The Hainburg Castle stands at the Schlossberg Hill (291 meters above the sea level).

Some facts from the history:

Emperor Henry III commissioned the erection of a fortress on the Castle Hill (Schlossberg) in 1050. Under Duke Leopold V the enlargment of the fortress started in 1194. Boundaries of the town were extended as far as the Danube River. 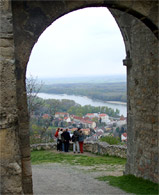 In February 11, 1252, Ottokar II, later the King of Bohemia, married at the castle the last Babenberger Margaret of Austria.

In Battle of Dürnkrut in 1278 Ottokar II, Premysl lost the castle to the Habsburgs.

After 1629, the castle belonged to the city.

In July 11, 1683, the Second Ottoman Campaign destroyed the city along with the castle. About 8000 people were killed or deported by the Turks.

On the 27th October 1996, on the Schlossberg, an agreement was signed on the Donau-Auen National Park, which should ensure the protection of all countryside that is unique in Central Europe and also the last of its kind.

Donau embankment is very lovely in Hainburg. There is a little port, walkway along with the river, restaurant and cycling routes and hiking paths are nearby.

From Bratislava to Hainburg by a bus

There is a regional bus return connection from Bratislava to Hainburg. The line is provided by Slovak Lines bus company in 2020.