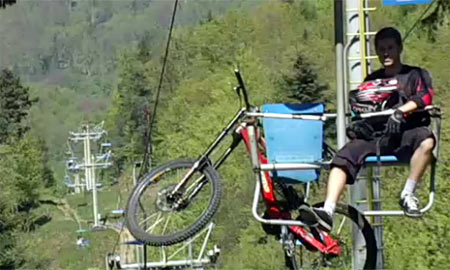 The best-known part of Bratislava Forest Park is that one under the TV tower prevailing over the whole city. It is the Kamzik hill (440 meters over the sea) area, generally called by Bratislava dwellers also Koliba, (by the name of hilly suburb through which it is generally accessed).

Its popularity stems mainly from a vast meadow where most Bratislavans got the basics of downhill skiing – therefore it is generally nicknamed Cvicna luka (The Training Meadow). There is a summer bobsleight run on the meadow and high rope courses area called Lanoland.

Most visitors in winter as well as in remaining seasons concentrate just in the top hill area close to this place with several restaurants (including revolving restaurant and cafe at the TV tower - 200 meters height), kiosks, a mountain hotel and, last but not least, very fine outlooks.

Small monuments, one commemorating the Turkish danger (from 1683), and another marking the place where the 1866 Austro-Prussian war was ended, emphasize historic value of this place.

The chairlift connecting Bratislava's Zelezna Studnicka with the Koliba-Kamzik hill was re-opened in September 2005. The chairlift operates during nice weather:

From Thursday to Sunday during other months.

The lift covers 186 m in height in about 14 minutes, offering great views.

Tickets are on sale at both end-stations - 3 EUR one-way, and 4 EUR return ticket. Tickets for groups are discounted. 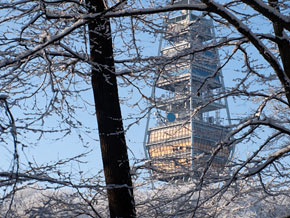 Kamzik hill is by most visitors accessed by trolley-bus line that can be taken downtown, just opposite the Presidential Palace (Grassalkovich Palace). At its last stop, called "Koliba", you have got an indefinite choice of hikes, short or long, throughout the Little Carpathians (Male Karpaty). Biker can use one of more or less steep gradients. The top-hill area is accessible also by private car, nevertheless especially during skiing weekends parking lots used to be overfilled.